Besieged by so many blackbirds, even Hitchcock might be nervous

I owe this one to my friend Patsy Brookshire, who one springtime not long ago provided me access to her “Peaceable Kingdom,” just south of Newport. It’s a beautiful little wetland, overflowing in wonder and wildlife — especially red-winged blackbirds.

Absolutely everyone reading this, I know, is totally familiar with red-winged blackbirds (RWBs). These are among a class of birds so “common” (e.g., robins, sparrows, gulls, etc.) that few people other than bona fide birders ever even “see” them anymore. I know, because I too thought myself pretty well-versed in red-wings … until, that is, I spent weeks of fascination at Patsy’s place, watching RWBs do things I didn’t know they did.

In springtime the little wetland that begins where Patsy’s back yard ends is so chock-full of RWBs, that at times its beauty borders on scary. Emboldened by their numbers, the RWBs are both aggressive and voracious. One day — having just watched a cloud of red-wings mob a great blue heron and mercilessly drive it from the marsh — I noticed that Patsy’s feeders had run low on seeds, and recalled the infamous Hitchcock horror flick of my youth, “The Birds.”

Mentally putting 1+1 together, I actually, honestly cautioned Patsy against any action (or inaction, such as allowing feeders to run dry) that might anger the birds. Patsy’s just a wisp of a thing (I’m not tall, but have to bend down to hug her), and in my mind’s eye I could clearly imagine a swarm of raucous red-wings grabbing her by the lapels and whisking her away to a horrible, Hitchcockian end.

Yes, in the build-up to nesting season — and even more so after, when hordes of newly minted chicks take to the air — there are indeed that many red-wings buzzing around Patsy’s little wetland. In ones and twos I find them very pretty indeed. But when zooming past at eyebrow level in aggressive squadrons of dozens, spinning out of a flock of hundreds, they can be pretty intimidating, too. Just ask the heron.

So as I watched them over time, and waded a bit around the edges of the wetland, it was a bit shocking but not really surprising to discover more than fifty RWB nests secreted among the watery weeds. With an average of three eggs per nest, it was clear that many red-wings were well on their way to becoming many more red-wings. All told it’s quite a story and I’ll be posting more of it soon, along with some great video.

But the narrow focus I’m aiming to maintain now, per the photos above, is the role that male RWBs play in nesting activities. Before my time at Patsy’s, I did not believe — because I had never witnessed any evidence of it — that RWB males provide any familial support other than nest defense. Oh man, was I wrong.

Beyond obvious breeding activities, males rally and drive females (and sometimes multiple females per male) to build their nests, going so far even to direct placement and oversee construction. They’re quick to crack the whip on females they feel are lagging. Once females begin incubating eggs, males provide very vigilant and effective security in the airspace surrounding their nests. And with dozens of males guarding dozens of nests, connecting any one of them to any single nest location is at least ten times harder than any game of “Three Card Monte.” At Patsy’s wetland, the males’ job was by no means “one-and-done” — I counted three distinct nesting cycles, with nest re-use amply evident.

As I observed chick development in several nests through a spotting scope and my camera’s telephoto lens, I eagerly anticipated the “magic moment” I’ve experienced at other bird nests, when the first chick to exit the nest spreads untested wings and launches bravely into the world on its very first flight.

When that moment arrived with my first RWB nest, I blinked and thought I must be mistaken: the first chick didn’t fly out — nor did the second or third — they climbed out of the nest. Clumsily clambering away from the nest to confound potential predators, they hid themselves in the surrounding foliage, where — to return again to the principal point of this post — the male found and fed them. Prior to this milestone event, all meals delivered to chicks in the nest had been the exclusive purview of the female.

I further observed that the male, perched just outside the nest, was not just “posing for animal crackers,” as my dad used to say, but was actively calling and coaxing the chicks to exit the nest — before they were yet able to fly. Ostensibly, early evacuation of the nest decreases chances of predation — as one photo shows, I did indeed find a nest full of feathers and bones, evidence that this danger is real. And as another photo shows, not all chicks were equally good climbers — I found several that had fallen from the weeds into the water and drowned. Unable to fly, neither could they swim.

For a period of days following each nest departure, I watched the males busily flit from chick to chick hidden among the weeds, delivering sustenance often derived (further surprising me) directly from Patsy’s feeders (in my observations, mom had most often if not always caught and brought bugs). The chick shown being fed in the photos above — still displaying downy baby feathers, comically short wings and practically nonexistent tail — was capable of just enough flight to clear the weeds and flutter upwards to a tree limb, where dad could more easily find and feed him.

Wow. So much unsuspected activity, occurring right before my eyes, left me chastened and humbled to think I ever thought I knew red-winged blackbirds at all. Thank you once again, Patsy! 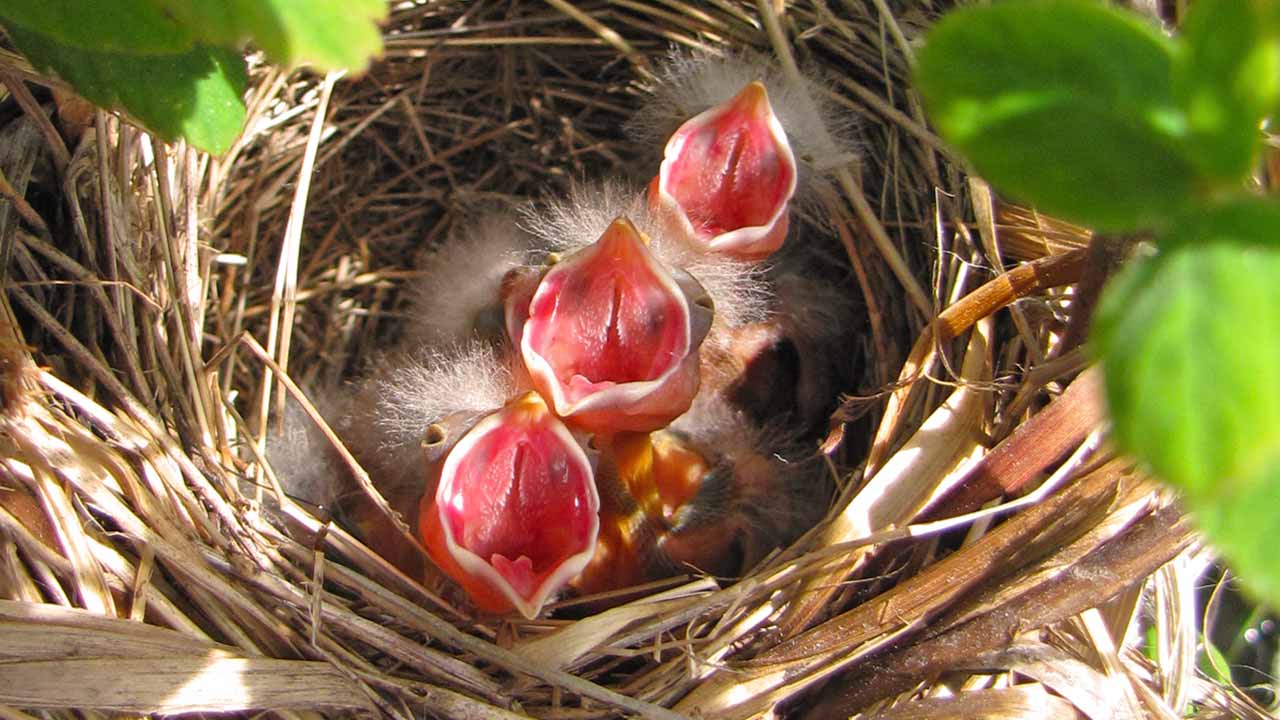